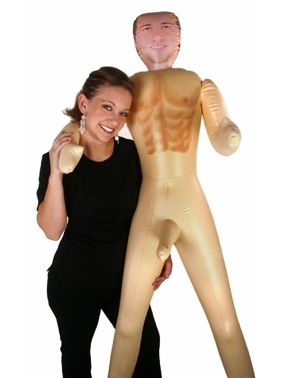 Some girls can’t stand Mr. Stud. They’re all like, “Oh, Mr. Stud’s just a big dick,” or “Mr. Stud thinks he’s so great but he’s full of hot air.” I know where they’re coming from but that’s not the Mr. Stud I know.

I first met Mr. Stud at a bachelorette party and I could tell he liked me. (That’s a picture of us together.) Maybe it was the way his eight-inch vinyl pecker twitched when I shook his hand-less arm. Before the night was over, I had given him my phone number. No, he never called, but that’s OK. We really didn’t have a future anyway. Still, I’m looking forward to the next bachelorette party where Mr. Stud makes an appearance.

Mr. Stud and many other bachelorette party supplies are available quickly and discreetly from Bachelorette.com.